In today’s ever-changing media landscape, we get a lot of questions about the Facebook ad platform. Storytellers everywhere want to know how recent changes to the social network will affect their business and the industry at large. To help make sense of it all, we launched the Keywee Facebook CPC Tracker, a monthly update on Facebook CPCs based on data from 500+ publishers.

Every month, we release new Facebook CPC data, along with relevant insights on content distribution. You can sign up for monthly updates straight to your inbox here, and read past months’ updates here.

In September, we saw CPCs that were 7% higher than those in August. This increase is to be expected at the end of the quarter, when we typically expect CPCs to be at their highest. However, the single digit increase in CPC means that September CPCs were only slightly above those seen in July of this year (a notoriously expensive month), and therefore well below where most teams would have projected. Budgets that had been reserved for the end of the quarter therefore stretched further than most publishers anticipated. This was extremely helpful for teams testing swaths of new content before Q4 kicked off.

We also experienced a year over year increase in CPC, as we did every month this year. After a very large YoY increase in July and a comparatively small increase in August, September seems to be evening out the trend. 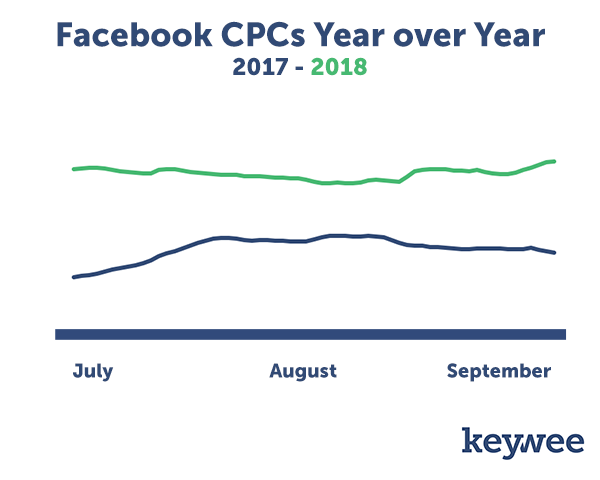 While there were CPC increases across every use case this month, we saw the largest increase for branded content campaigns. However, we didn’t see much of a slow down in publisher spend on these campaigns.

The reasoning? September kicks off the most lucrative season for branded content (back to school + holidays). While publishers may have to spend a bit more on distribution cost, they can still expect a healthy margin given the larger deals they’re able to close at the end of the year. So long as they see a healthy ROI, they will continue to spend on Facebook. This is a trend that we’ll be keeping an eye on going into Q4 as both branded content deal sizes and distribution costs are bound to go up.

Looking ahead: What about Q4?

In a year of fast-rising CPCs, the question on many marketers minds is: “What’s going to happen in Q4?” The season is well-known for its substantial revenue opportunities, and yet infamous for its CPC increases.

Based on what we’ve seen this year, Q4 will be expensive. Really expensive. But there is still a huge opportunity to drive revenue in the quarter. The key lies in your conversion rates. Rather than scaling your distribution around content that is driving the cheapest traffic, during Q4, it’s imperative to optimize around driving the most profitable traffic. This requires a deep understanding of your marketing funnel and the ability to tie revenue back to individual articles.

For instance, Cyber Monday is one of, if not the most expensive days of the year on Facebook. So if you were simply trying to build an audience, you might spend the bare minimum on that day to avoid overpaying for your audience. However, if you monetize through affiliate links, e-commerce, or display ads, the revenue opportunities on that day are also at their peak. This means, given the right balance between spend and revenue, it can be worth spending quite a lot on Facebook that day. The key to spending profitably is to understand which of content converts best, given the price you need to pay to distribute it.

As prices have increased on Facebook this year, we’ve seen a shift by publishers away from simply driving traffic, and toward driving consumer actions instead. Those who have started this type of marketing already will be well prepared for Q4 when this type of campaign is key. To learn more about this process, read our most recent eBook: Using Content to Convert: Building a Funnel on Facebook That Drives Paid Subscriptions, Affiliate Revenue, & Other Reader Actions.

Keywee works with hundreds of publishers to distribute content profitably, even during Q4 when CPCs are at their highest. Request a demo to see how we can help your team maintain your content distribution ROI this quarter.