This year’s ongoing Facebook changes have led to countless questions about Facebook CPCs and the state of paid content distribution. To help publishers stay afloat of the most important trends, we launched The Keywee Facebook CPC Tracker, a monthly update on Facebook CPCs based on analysis of data from over 500 publishers.

We release new CPC data every month, along with relevant insights on content distribution. You can sign up for monthly updates straight to your inbox here, and read past months’ updates here.

This June, we saw some pretty sizable increases in CPCs. Although the numbers were somewhat surprising, an increase in price was to be expected; we’ve seen year over year increases in CPCs every month this year, and CPCs are always at their highest at the end of a quarter. Throw in the end of the first half of the year, and we went into the month with some pretty high expectations for June CPCs.

The reason for this pattern? At the end of a quarter publishers need to spend their budgets and don’t have the flexibility to wait for the best pricing to scale. This happens across multiple types of businesses, which also increases the demand of Facebook ads, again driving up the price. While we can’t say for sure what factors drove the increases to be larger than usual, we expect this overall quarterly pattern to stay the same.

Despite overall high prices, there were a few bright moments in June. As usual, the very beginning of the month and middle of the month presented windows of opportunity with lower CPCs. Publishers keeping a close eye on pricing (or using Keywee) were able to scale at these opportune moments. 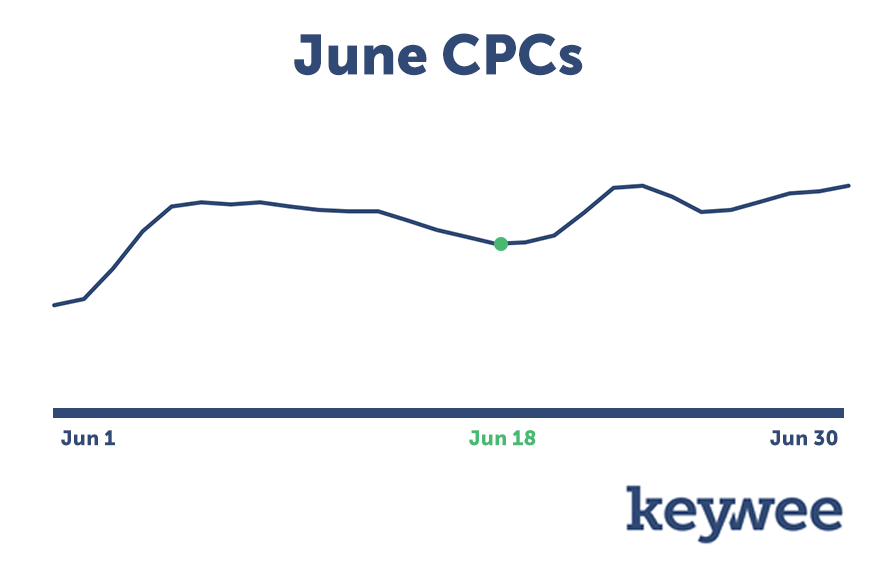 Even with higher-than-usual pricing, we saw steady spend increases from publishers running branded content and profitable audience development campaigns. This just continues to bolster our hypothesis: publishers will continue to increase their budgets on Facebook, so long as it continues to be profitable for them. When Facebook campaigns tie directly into ROI (and especially when you can track revenue on an article-by-article basis), it is easy to justify higher levels of spend.

With the first half of the year now behind us, we thought this would be a good chance to look back at CPC trends for 2018 so far. 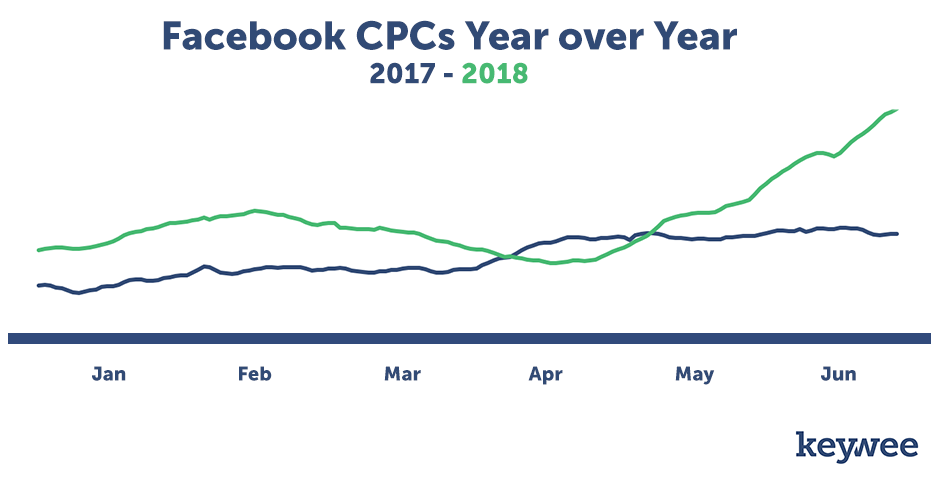 While the first quarter of the month followed trends similar to the year before (you can read more about that here), Q2 threw us for a bit of a spin. While April prices were below what anyone might have expected (even lower than the year before), we saw consistent price increases through May and June that were well above what we had seen in 2017.

Part of that change was due to the way publishers are spending on Facebook. While Facebook used to be seen as a platform for driving traffic to content, publishers have begun to embrace it for a variety of business goals. We’ve seen an overall trend toward more complex business goals like repeat visits, email signups, and even conversions to paid subscriptions. While these use cases are an extremely powerful use of the Facebook platform, they do cost more on a per-click basis than simple traffic.