In the wake of ongoing Facebook changes, we launched The Keywee Facebook CPC Tracker, a monthly update on Facebook CPCs based on analysis of data from over 500 publishers, to answer frequently-asked questions about Facebook CPCs and the state of paid content distribution.

We release new data every month, along with relevant insights on content distribution. You can sign up for monthly updates straight to your inbox here, and read past months’ updates here.

Overall: Business as usual. Despite increased attention on the Facebook advertising platform, CPCs were stable in March. There was actually a slight decrease in CPC overall since February. For most use cases, price changes were practically indeterminable. This was good news for teams running audience development campaigns, and particularly for those looking to drive profitable audience development, who spent 20% more on Facebook than they did last month.

Branded content prices are heating up. One type of campaign that did see a price increase from February to March was Branded Content. This is in line with a general industry trend: paid distribution for branded content generally peaks at the end of a quarter when campaigns are coming to a close and the demand for impressions is stronger. With little exception, the last month of the quarter has the highest branded content CPCs of the quarter (the first and second month, interestingly, don’t follow a set pattern).

March CPCs followed the expected monthly patterns – the lowest prices early in the month, a small window of opportunity of low prices in the middle of the month, followed by a steady increase in CPC until the end of the month.

In fact, Q1 CPC trends as a whole were remarkably similar to those of Q1 of 2017. 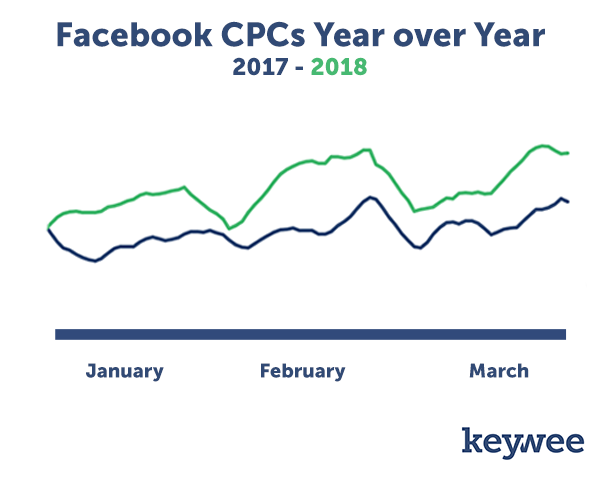 We saw the same general trend of low prices in January and early February, followed by a large increase (and local maximum CPC) in mid-late February. March then behaves as we described above, with low prices at the beginning of the month, a small dip mid-month, and then a steady price increase for the rest of the month.

While we have seen year-over-year increases in pricing, overall Facebook pricing remains stable, despite any changes in the News Feed.

Final Thoughts: Pricing reliability is an opportunity for publishers

Although Facebook is becoming more expensive advertising platform over time, there are some reliable pricing patterns. This creates an opportunity for publishers whose campaigns are flexible, to spend when prices are known to be low.

One such reliable time is the beginning of a quarter, making April a great time to scale spending. Where possible, publishers should use the beginning of April to double down on campaigns and test out new stories. Finding the articles, creatives, and audiences that work best will be helpful at the end of the month, when prices are likely to increase.