Whenever Facebook announces a change to their platform, we hear the same question: “Will Facebook CPCs increase?”

Honestly, the short answer is, we don’t know. However, based on Keywee’s analysis of over 500 publishers and one million articles, average CPCs for publishers on Facebook have been stable in the past two years, despite numerous News Feed change announcements. 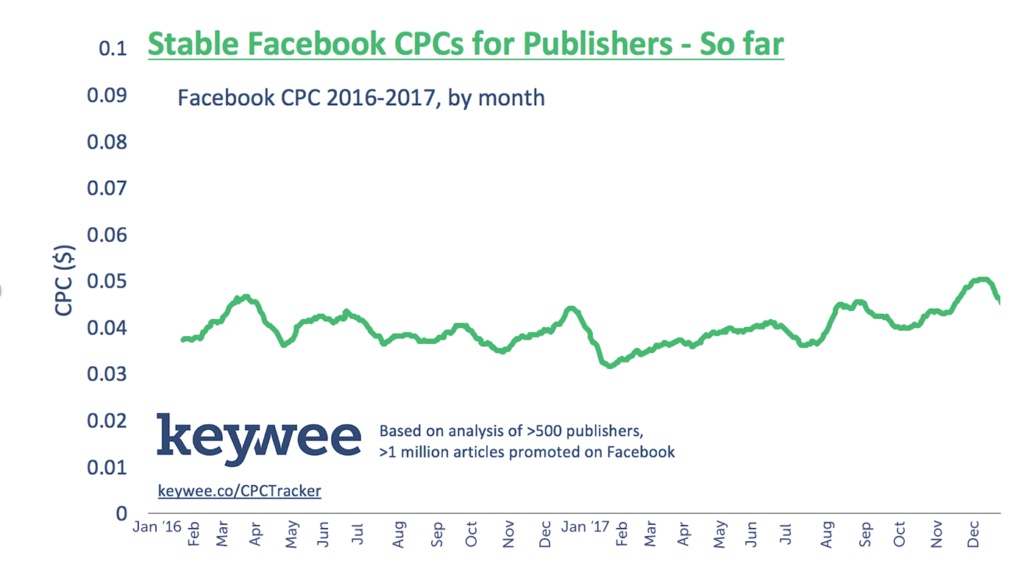 About Keywee
At Keywee, we make stories relevant and powerful for the world’s best storytellers — like The New York Times, The BBC, National Geographic, Forbes, and Red Bull.
Today, people aren’t coming to websites to search for content — stories find their audiences in feeds and apps. The upshot? Distribution is now the key for effective storytelling. Keywee’s platform unlocks audience insights using AI and data science, and infuses them into every step of the storytelling process: from topic selection, to story creation, to distribution and optimization. Keywee is backed by leading investors such as Google’s Eric Schmidt and The New York Times, and has been a fast-growing, profitable startup since its inception. To learn more, request a demo here.

About the Author: Nicki Kornbluth

Nicki can be found in front of a spreadsheet, in her (tiny NYC) kitchen, roaming the aisles of a craft store, or halfway around the world.