The branded content market is exploding. Some estimates peg the market size for branded content at $20 billion over the next five years. With so much at stake for a key component of content marketing, it’s easy to understand why it’s important to so many people. Update – Three years after we wrote this article branded content is expected to reach a yearly spend of $13.4 billion, double the initial estimate.

When a brand partners with a publisher for a branded content campaign, the brand is buying a few things: the publisher’s storytelling expertise, its influence and thought leadership, and access to an engaged, relevant target audience.

Unfortunately, getting this audience to interact with branded content articles is becoming increasingly hard. Organic traffic isn’t what it used to be, especially on social media, and branded content specifically doesn’t get much SEO love.

To combat this trend, it’s common for publishers to acquire audiences when there is a positive ROI. For editorial content, this means buying traffic for profitable audience development and subscriptions. For branded content, it means buying traffic as part of a bundled offering that may include acquisition as part of the cost or may break it out as a separate line item.

Branded content campaigns may also employ paid content distribution strategies if the publisher guaranteed impressions to the content piece, and is not meeting the goal with organic traffic. To maintain a good relationship with the brand for the long term, publishers may sacrifice short term profits.

In 2017, we’ve seen growth in paid content distribution overall, with publishers doubling their spending on Facebook in the past 18 months for multiple content marketing objectives. Paid branded content distribution has been growing faster than paid editorial distribution – it has more than doubled year over year (113% growth), and its share of total publisher spend on Facebook grew from 0.8% in Q3’16 to 9.5% in Q3’17 – as presented in the chart below. These figures are based on Keywee’s analysis of data from over 400 publishers and one million articles promoted on Facebook. 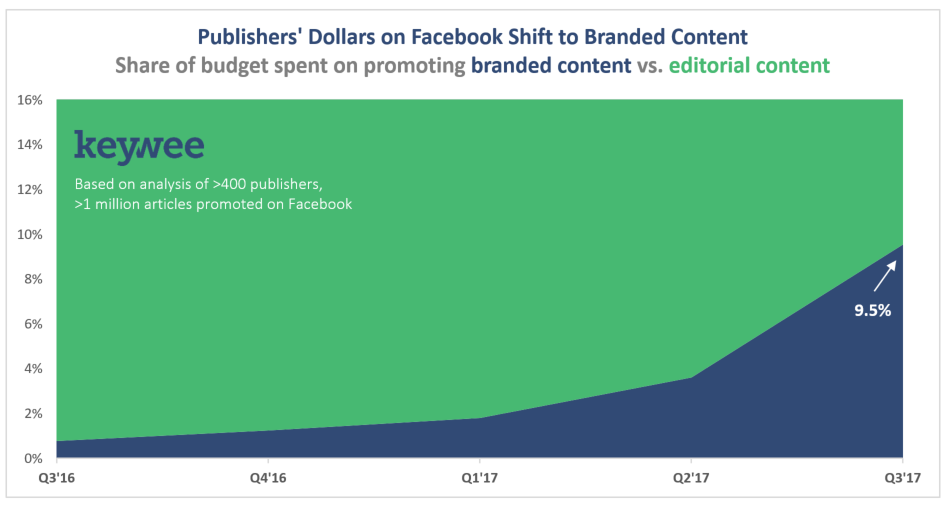 We have a few tips that could help you with your paid content distribution on social media and are also applicable for your branded content efforts.

About Keywee
At Keywee, we make stories relevant and powerful for the world’s best storytellers — like The New York Times, The BBC, National Geographic, Forbes, and Red Bull.
Today, people aren’t coming to websites to search for content — stories find their audiences in feeds and apps. The upshot? Distribution is now the key for effective storytelling. Keywee’s platform unlocks audience insights using AI and data science, and infuses them into every step of the storytelling process: from topic selection, to story creation, to distribution and optimization. Keywee is backed by leading investors such as Google’s Eric Schmidt and The New York Times, and has been a fast-growing, profitable startup since its inception. To learn more, request a demo here.