The reason social media is such a strong marketing tool, apart from the massive reach it offers, is the versatility of ads that marketers can create to engage with their audiences. And while there are thousands upon thousands of articles filled with tips and best practices, the simple truth is that there is no silver bullet, there is no best way to reach your audience, and actual results will ultimately vary.

So, how do you decide what to post? How can you make sure that you’re getting the best performance out of your social media ads? The most commonly used method is to run small-scale controlled tests — A/B tests — to gain those insights efficiently.

What is A/B Testing?

In the context of marketing campaigns on social media, A/B testing is the process of running versions of ads that are different from one another in only one aspect. While it may seem simple enough, the sheer amount of ad variations that are possible requires you to be very precise and to plan your split tests in advance. Otherwise, you might end up with no significant insights and a budget that was wasted, not invested.

If you’re wondering, “Do I need to test every ad variation against all of the others?” the answer is no. Think of A/B testing like the playoffs: One team wins despite only playing against some of the teams, not all of them. When running an A/B test, it’s crucial to only test one variable at a time, then after you test different images or other variables, you can pit the winners of the different tests against each other to find the best ad.

What can you expect to get back from the test? In a word: insights. With A/B testing, you can gain insights into what micro-content, or post, works better. More specifically, learn what types of imagery, post texts, headlines, Calls To Action (CTA), and other aspects of your campaigns work better for your audience on social media. For content marketers specifically, A/B testing has another critical dimension: It can help them decide which content drives the most loyal audiences and delivers the best results.

Keep in mind though, A/B testing is a never-ending process. What worked today may not work in a month, so you will have to continue your tests and test different variables on occasion.

Types of Social Media Testing: What Variables Should You Test?

Getting Down to Business: How to Test

Step One: Decide on your goals
Knowing what your objectives are is fundamental to setting up a campaign that will yield the best results. Identifying your objectives correctly will help you both in planning your budget and in deciding what to test. Is your goal to achieve a high CTR? Low CPAs? Overall impressions? The possibilities on various social media platforms are endless, so it’s important you define what success means to you.

Step Two: Decide what to test
Based on your goals, you’ll be able to decide how many factors you can test initially, or how many iteration cycles you can run to find the best ad. For example, when optimizing for overall impressions, your aim would be to get the lowest Cost Per Thousand Impressions (CPM). The main elements that affect the CPM are the ad placement and targeted audience, so that is what you’d start testing. If you’re optimizing for high CTR, on the other hand, the creative assets (the copy and visuals that comprise the ad) and CTAa also have a strong impact. Your goals will guide you in the process of choosing which factors of the ad make sense to test.

Step Three: Set your budget
Once you know the goal that you’re optimizing around, it’s time to plan your budget. How much money are you willing to put into a test? Some considerations: Where in the marketing funnel is the goal located? Are there specific hypotheses you need to examine? For example, if you have a target CPA of $8, you can use that as your benchmark. According to Facebook, you need a minimum of 50 conversions per week for its optimization algorithm to perform well. Doing the math ($8 CPA x 50 conversions) gives you a test budget of $400. You should add some wiggle room for ads that will underperform, so a final test budget of around $450 would likely be sufficient.

Step Four: Run your test
Below is an example of a test we ran here at Keywee. The objective was to optimize an audience development campaign for loyal visitors with clicks coming in under a specified price. With only a small budget for testing, we decided to start the experiment with which type of image (either focusing on the person or on the landscape) would drive higher engagement rates. We also tested two different audiences, as people react to ads differently. When the test concluded, the winning ad had a CPC that was lower than the next best ad by 50%. 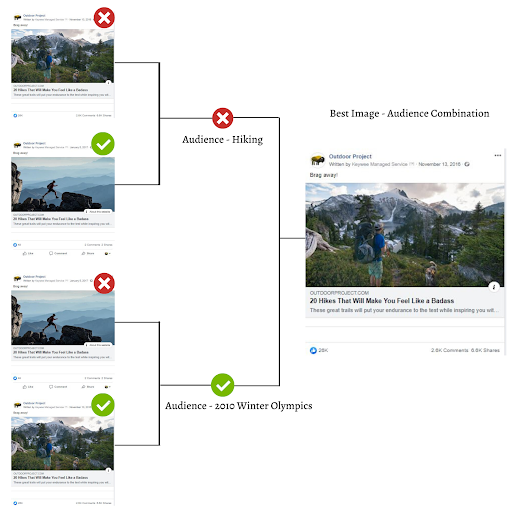 Step Five: Repeat
Once you finish your test, take the best performing ad and scale your spending on it to achieve your goal. Then, make a change to one aspect of it that you haven’t tested yet, and run another experiment to examine its effect on performance.

You Finished Your A/B Test, Now What?

Well, the good news is that you now know what is likely to work and move the needle for your digital marketing campaigns. You have the data to back up your claims and you can share it with colleagues. Whether your aim is to get paid subscriptions, beef up your email database, get eyeballs on branded content pieces, or anything else, you now know what is more likely to work for you.

The bad news is that, just like shampoo, for the best results you should rinse and repeat. Not only are there other variables to test, but as time passes and algorithms change, you will need to test your results again to make sure they still hold.

As you scale your campaigns to meet your KPIs, make sure to set aside some budget to continuously test more content, more ad components, or different social media platforms altogether.

Continuous testing ought to be a key part of every social media advertising campaign. Whether you’re a brand or a publisher, only with efficient testing will you improve your results.

Our rule of thumb is to dedicate up to 10% of a campaign’s budget for testing. This split allows you to meet your KPIs with the remaining 90%.

At Keywee, we help storytellers supercharge their A/B testing. If you’d like to hear more about how we can work together to help you, let us know.