Getting Real About Ad Revenue

Some real talk: I feel like every single article I’ve read recently around ad revenue for publishers has been doom and gloom. I’m not saying the news isn’t bad. But the thing is, it’s not all bad.

I want to take a look at what we’ve seen at Keywee from publishers who rely on ads as their primary revenue stream.

Publishers are facing a difficult predicament:

On the one hand, traffic is surging across the board. People are seeking out reliable information and distraction. Publishers are on the front line of these needs. On the other hand, traffic spikes aren’t translating to ad revenue spikes as eCPMs are down by as much as 41% on some publishers.

Let’s look at why this is:

The good news is that eCPMs are tracking with Facebook CPMs, meaning that costs are coming down at the same pace as profits. More on that below. 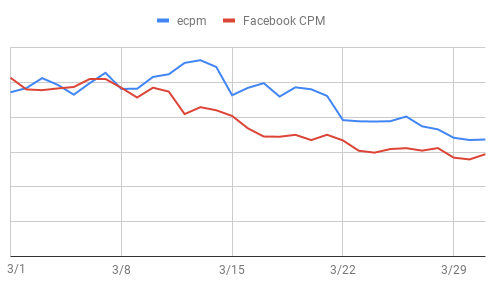 Not All Declines are Created Equal

Despite these relatively dark tidings, there is plenty of room for hope, and huge growth potential and opportunities. Let’s talk a bit about costs.

In my previous post, I mentioned that CPCs have gone down significantly and that instead of going up at the end of the quarter as is usually the case, they continued to decline. This is good news for anyone looking to drive high traffic volume at a low cost.

That isn’t the end of the bright spot. In general, we’ve seen that the decline in CPCs has had a positive impact on CPA campaigns. Anyone optimizing toward a defined business goal is seeing their costs go down. There’s a specific big winner here: The effect on campaigns optimizing for page views (cost per page view or CPPV). As you can see in the chart below, where CPCs and CPPVs were tracking at roughly the same level before the crisis peaked, the CPPV has gone down even further than CPCs.  In short – people are hyper-engaged with content right now, leading the quality of traffic to be much higher simply because of the current circumstances. 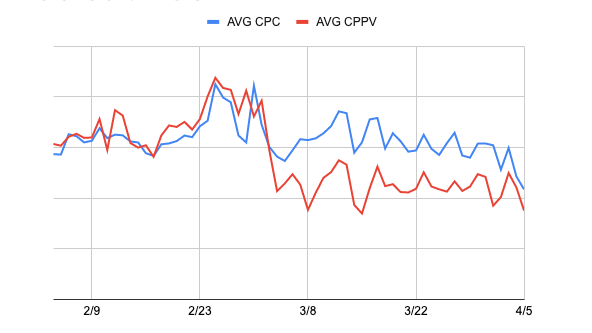 As always, I want to wrap up by talking a bit about the content trends we’ve been seeing. But before I do that, a few words on Facebook’s content policy. Facebook is cracking down on Corona-related content, for obvious reasons. The amount of misinformation and opportunism is staggering. That being said, there are ways of talking about Coronavirus without running afoul of Facebook’s policy. In a word: Hope.

Think about your own experience in these uncertain, crazy, humbling times. There are moments of worry and anxiety, but there are also hopeful, happy stories that bring you to tears and fill you with gratitude for the pure good that people are capable of.

Who doesn’t want a little bit of that? That’s what people are flocking to. Inspiring stories about neighbors helping each other, people getting married over Zoom, hanging Christmas lights to spread some cheer, making masks using their 3-D printers, and so much more.